About a week ago, I got an exciting email. SUPER III has been Greenlit! I’d like to talk a bit about what that does and doesn’t mean for my game development endeavors. 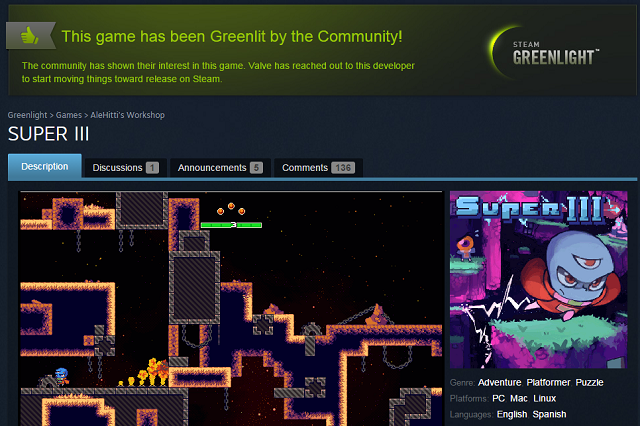 SUPER III was created some time last Summer (June 2014). I opened up Game Maker Studio, played around with some old platformer mechanics that I had lying around, and made a small demo in a matter of hours.

It was fun, simple, and iterated on some design issues that I had stumbled upon when working on FROG SORD the year prior. As it stands, the game has somewhat of a “first world” fleshed out. You can play the alpha build HERE. I also have a multiplayer mode up and running with a few variations planned.

What we currently DON’T have is an artist. Hunter is busy working on Duelyst and will be busy with that for quite some time, I imagine. Our options are to hire someone to replicate his style (we can’t quite afford that currently), or release something that is less expensive to make ends meet.

One thing that I’d really like to do is release the multiplayer as a stand-alone on itch.io. The multiplayer was never a focus but we had a ridiculous amount of fun playing, testing, and recording clips with our friends via 4-player death match and capture the flag.

SO…that’s basically where I’m at. Thoughts, suggestions, concerns, etc are all welcome. This is all happening in the middle of some pretty large negotiations about a future project, so things will continue to change and shift.

One thought on “SUPER III was Greenlit!”